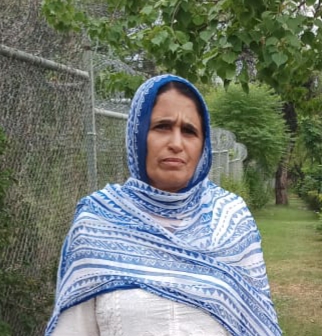 Forty-five-year-old Shan Bibi belongs to Ghora Khela village of district Swat in Khyber Pakhtunkhwa province of Pakistan. She got married at a very young age. According to the customs of the area, it was not an unusual thing to happen.

Her husband was not very welcoming towards her and treated her badly. She tried her best to make things better but nothing worked. Finally, she decided to take divorce from him and came back to her parents’ house.

After a few months, her father got her married to an old man who was already married to someone and also had children.

Shan Bibi gave birth to six of his children. This marriage also did not last long. After her sons got married, her husband divorced her on a minor dispute.

Bibi is now living with her children. She is an active member of the community. She raises awareness about girls education and stops people from getting their daughters married at an early age.

She does awareness sessions with young girls and parents in which she tells them how early age marriage affect the physical and mental health of girls and the whole family.

She has been working with Shirkat Gah – Women’s Resource Centre for the past few years. She, voluntarily,  gave two rooms of her house to Shirkat Gah to conduct awareness sessions under one of its projects ‘Women Acting for Change’.

Women Acting for Change (WAC) is supported by Royal Norwegian Embassy (RNE). It aims to make women and girls better informed about their rights with a focus on girls having greater bodily integrity and better access to rights and services. Under this project, four Women Friendly Spaces (WFS) were established in four districts across Pakistan. These WFS provide women a safe space to discuss their problems and make it easier for them to access rights and services through referral networks, such as Local Support Groups and Referral pathways.

Bibi is always the first person in her area who raises her voice against any injustice happening to any girl in the area.

She especially raises her voice against early age marriage of girls. If she gets to hear of any early age marriage happening in her surroundings, she goes there and tries her best to stop it. She talks to the parents of the girls and the girl herself. She goes with her allies from the community to talk with the family.

She has stopped at least fifteen early age marriages till date which is a huge number keeping in view the restrictive culture of the valley.

She also has the credit for mobilizing women in Swat valley to stand against odds and demand their rights. Dozens of women in her leadership did protest against the shortage of gas supply in the area. It was the first women’s protest in the history of Swat.

Once her grandson fell sick in the middle of the night. She took him to Saidu hospital. There was no doctor in the emergency to attend patients. She found the doctor sleeping in the adjacent room. She woke him up and asked him to see her grandson. The doctor got furious and told her to leave.

She told the doctor to resign from his position if he cannot do his duty. Afterward, she called a Member of Parliament Assembly, Fazal Karim, and narrated him the whole incident. Shortly, Mr. Karim was there. He confronted the doctor for his behavior and told him to submit a report.

Besides that, she has taken several trainings on sexual and reproductive health conducted by Shirkat Gah in Swat. She replicates trainings in the community to the local people. Through her efforts, the local people are now more sensitize towards their daughters.

A few days ago, she stopped a forced early age marriage of a young girl in Koshitan. Her neighbor told her about the case. She went to a girls college in Kohistan. She told girls about this brutal custom and asked them to join her in the protest in front of the court. Hundreds of girls joined her after which the decision was taken back.

She is an icon of resistance and hope for hundreds and thousands of women of Swat. She believes that if the right steps are taken at the right time and girls are given liberty to take their decisions, no one can hold them back.

All posts by Tehreem Azeem
Click here to cancel reply.