Kalimantan Women Losing Their Children to Mine Pits 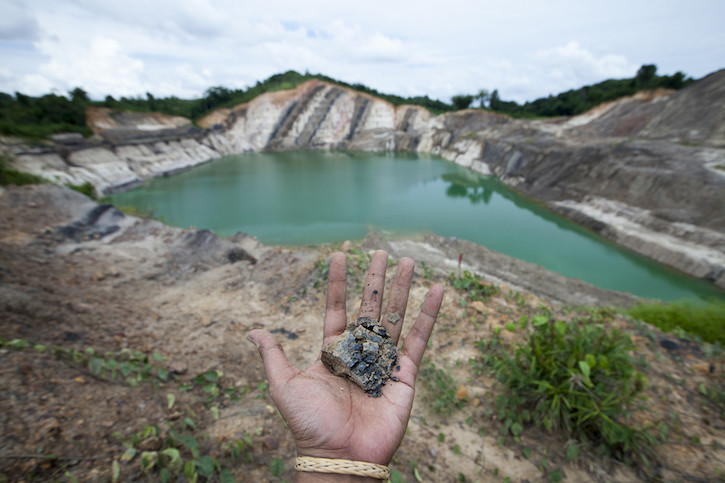 East Kalimantan, an Indonesian province in the east of the island of Borneo, is home of indigenous Dayak culture and rainforest areas like Kutai National Park. If we try to uncover the problems of local women in Kalimantan, we will find horrific stories of pain and miseries.

Women, here, not only struggle against domestic violence and the multiple burdens attached to eastern women but they also fight against damage caused to their environment because of the open mine pits.

One hundred-and-fifty such pits scar Samarinda’s landscape, with an estimated 500 in total across East Kalimantan, according to the regional branch of the Network for Mining Advocacy (JATAM). JATAM recently released a confronting YouTube film with interviews of the families who have lost children to mining pits.

In Indonesia, women have a role and responsibility for managing water and sanitation for their families. Women are obliged to provide water for the needs of family members. But since mine was discovered in the city of Samarinda, the supply of clean water has run out in the area. Mountains were cut off which obviously affected the clean water supply. The area is also exposed to the risk of flood in every rainy season.

The worst thing about this situation is that these mine pits are very close to the main town. I visited the area to conduct a study on the psychological condition of mine survivors. I lived in the home of one of the mine survivors, R*, in the Bengkuring village of East Kalimantan. The closest mine pit to their home was at a distance of 80 meters only. The water they get at their home is not clean and yellowish in color.

R* is not the only victim of these mine pits; there are many women who are getting affected by the mine. Many of the people living in Mulawarman had to leave their homes because of the mine. The productive land of Mulawarman village was initially 500 hectares which have now reduced to only 6 hectares.

S* who is a resident of this village pays 50000 rupiah to buy water for her home every day. More than that S* is forced to accept layered loads, and different issues at her house because of her lack of access to clean water.

R* lost her child to one of the mine pits. Her child was found dead in a mine pit 500 meters away from his house.

R* is not the only mother whose child became a victim of these mine pits there are many who have lost their children in similar accidents. Since 2014, 31 such cases have occurred. Almost all of these cases occurred with children who were playing with their friends. These mines have also ended safe spaces for children in the area.

The total mining concessions in Samarinda are 72% of the total area. More than 70% of the land in East Kalimantan functions as a coal mine. While in the city of Kutai Kartanegara up to 625 mining permits have been issued by the Kukar government and have expropriated 867,684 hectares, equivalent to 17 times the size of the city of Bontang next to it. In total, there are 3,033 open mining holes throughout Indonesia as reported in 2018 and 1733 mine pits in East Kalimantan only.

Thousands of pits were left open without caring for the residents of the area and their safety. The mine pits that are too close to these settlements are heavily affecting the health of individuals specifically children who are more exposed to pollution directly and indirectly.

I attended the funeral ceremony of A* on the 5th of November 2018. He was a child who drowned in a mine pit on his 13th birthday.

Environment changes affect women the most. Unfortunately, any changes in the environment are not analyzed through a gender lens. Even the number of missing children is seen as a small statistic when dealing with national income figures due to coal. Even though this income figure is very small compared to the price of ecological damage that must be paid by the state.

Since 2014, at least 31 children have died by falling in mine pits.  The women who lost their children suffered from deep grief and trauma. In addition, these women are still dealing with environmental damage which the Indonesian government is not taking seriously.

The East Kalimantan Governor Isran Noor response to deaths of these children went viral on the National media a few months before. He said that the death of a child in a mine pit is his fate and the fate must be accepted. He also said that death can occur anywhere.

He again gave a controversial statement when the 31st victim fell in a mine pit in Tenggarong sub-district.

“I am also surprised by these deaths. Maybe there are many ghosts in the pits,” he said.

The irony is that this irrational statement comes from the head of the government who is supposed to be in charge of the safety of people.

Until now, the survivors of the mine are still struggling to survive with the destruction of nature that befell them, without any support from the state and without the slightest point of light regarding justice for their gone children.

*Names were not disclosed to protect identities of the individuals.

All posts by Marrium Jameela

One thought on “Kalimantan Women Losing Their Children to Mine Pits”

I think other site proprietors should take this website as an model, very clean and magnificent user friendly style and design, let alone the content. You are an expert in this topic!