Sixty-five-year-old Naseem Bibi runs a grocery shop inside her house in a village near Hyderabad, Sindh. She opened this shop a year ago after attending Financial Management Training (FMT) organized by Shirkat Gah – Women’s Resource Centre as part of its project ‘Drivers of Change’.

‘Now, I buy my medicines myself. I do not have to ask my son for my needs. I earn my own money. I also help him in running this house,’ she said with a smile on her face.

Naseem Bibi has had helped her husband in running his tobacco shop for several years. After the demise of her husband, she had to close the shop. She started selling clothes. She would buy clothes from Hyderabad city and sell those in nearby villages. It was not profitable.

She, then, opened a grocery shop in her house but it also failed. The local community action group invited her to attend two-day financial management training in August last year. The training covered basic skills needed to start and run a business including bookkeeping and then having the women come up with a business plan that they could implement.

The participants of the training were selected according to a set selection criteria in that they were either already or willing to start a small enterprise of their own and have basic literacy skills.

In this training, Naseem Bibi learned how keeping a diary and recording every transaction can make her business profitable. Earlier, Naseem Bibi was not charging anything for commodities being consumed in her own house. She was told that it must be added in expenses.

‘Keeping my all fears aside, I decided to start my shop again. I took to start with 6 thousand rupees only. Now, my shop has commodities worth of fifty thousand rupees,’ she told proudly.

She started charging his son for all the things his children and wife will take from her shop.

‘I would give a bill of all items used in the house to my son in the evening and take money from him,’ she told.

Similar to Naseem Bibi, 29-year-old Ulfat Shahi attend this training in Swat. She runs a vocational training center where she gives training to young girls and women on stitching and designing.

She got first prize for her business proposal idea during the training session. 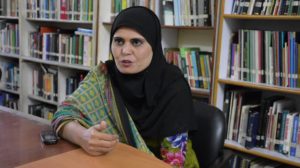 ‘My total budget proposal was 15 thousand rupees only. I thought I would buy a used sewing machine with 10 thousand rupees, 3 thousand rupees for mobile budget, thread, oil required for machine and I kept 2000 for emergency situations,’ she told.

She took 20 thousand rupees as a loan from her cousin and bought an overlock machine.

‘I reached out to local tailors and told them that I could overlock their dresses. They started giving me their dresses for overlock. I would get Rs. 10 for a shirt. It was cost effective for them too. Earlier they had to go to the city to get the clothes overlocked,’ she said.

She got a grant of one hundred thousand rupees. She bought five sewing machines, clothing, thread, and other necessary items.

‘I prepared a frock and sent it to the boutiques of my area. One boutique agreed to keep it on display. It was sold very next day. This boosted my confidence,’ she told.

Shahi has not looked back since then. She takes projects from different boutiques and companies and works on those to earn a living. She has a team of 12 girls who work 6 hours a day to complete these projects in time.

Earlier, her brother uses to contact different companies on her behalf. Now, she talks directly to them. She now has planned to use Facebook for promotion of her vocational training center and to get more projects.

The project – Drivers of Change – is funded by the United Nations Trust Fund to End Violence Against Women. The project works through community action groups to reach a wide range of people. It is active in markets, bazaars and community theatres, and advocates with local governments.

All posts by Tehreem Azeem

Thanks for finally writing about > How A Financial Management Training Helped These Women To Change
Their Lives – FEMPOWERMOVEMENT < Liked it!

Fine way of explaining, and nice post to obtain information regarding my presentation subject, which i
am going to convey in institution of higher education.

Spot on with this write-up, I absolutely think this site needs a lot more attention. I’ll probably be returning to see more, thanks for the
advice!

I am really pleased to glance at this blog posts which consists of
tons of valuable facts, thanks for providing such data.

You ought to take part in a contest for one of the most useful blogs
on the web. I will recommend this web site!

Everything is very open with a precise explanation of the issues.

It was really informative. Your website is extremely helpful.
Thanks for sharing!